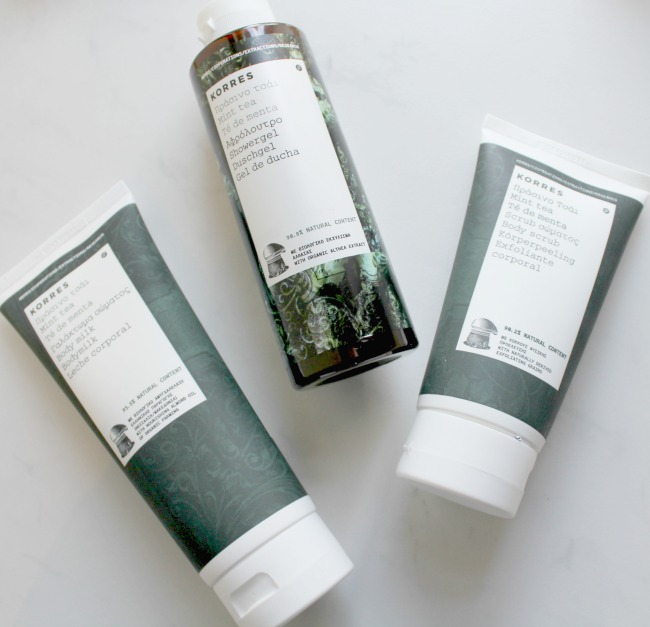 Before we kick start this blog post I'm just going to say that I know there is no such thing as a unisex scent. Or a male scent, or a female scent. All scents are just there, irrespective of gendering. BUT, companies gender them for us. I can't remember the last time my shower gels promised to wake me up with a zesty start, or my boyfriend's promised to soothe him into a relaxing floral embrace. It's just something that has happened. And I know, I can go down the male toiletries aisle and buy a grapefruit scented shower gel that promises to startle my senses in the morning, but I like the idea of having a shower gel for women, and going for a male one has never really crossed my mind.

Anyhow, when Korres kindly sent me their Mint Tea shower gel*, body milk* and body scrub*, I had no idea that they would just smell so manly. When these arrived in the post, my first port of call was to give them a good ol' whiff and I was a little bowled over by the scent. You see, I'm not really a peppermint fan, and I know that these aren't strictly peppermint scented, but I still expected them to be. In reality the scent was a lot more delicate than traditional mint, and they had managed to capture the tea scent so well that you could almost smell the herby leaves.

I actually found myself looking forward to showering. Showering is something that triggers my anxiety, and if I'm having a poor mental health day, then the idea of it can be insurmountable. But, each morning I woke up in my general haze of half asleep-ness with the thought that I would be 100% alert once I got out of the shower. Seriously, this stuff worked miracles on my senses. After a good cleanse, followed by moisturising with the body milk I felt more awake than I ever normally do in the morning. It actually made me feel like one of those people that can get up at the same time every day and not go back to bed straight after breakfast for a nap.

This range, in short, has made me realise that maybe male scents are the way forward for me in the shower. Maybe changing my habits and going for that zesty wake-up scent rather than my usual picks is the way forward. Either way, next time shower gel is on my shopping list, I'm going to pick up a less feminine scent and see if it works!

*Although products in this post were gifted to me for the purpose of a review, all opinions are as always my own*

Have you tried a unisex scent before?