Do I need to be rich to be a successful blogger? 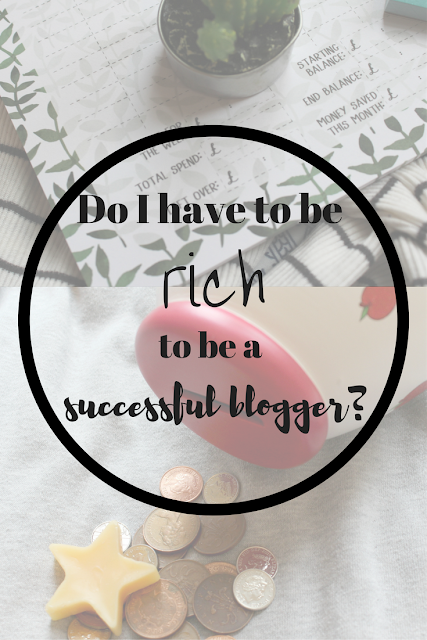 This is a question that really has been bothering me for quite some time now. It's also something that I've attempted to answer over and over again, with virtual scrawls over half of each draft. Sometimes it comes out more angry, sometimes it's more hopeful, but I've finally decided to sit down and put my pen to paper (sort of) and share my thoughts.

My Instagram feed is regularly full of Jo Malone perfumes, throwbacks to last summer's Santorini trip, Diptyque candles, and enough 'only worn once' clothes to fill a boat. But what if you simply can't afford to engage in any of that? Does it make you fall behind in the blogging world because you don't have the money to compete? I think the brutal answer - and the one that I've tried to avoid realising - is yes.

When I first started blogging, me photos were all taken on a grainy iPhone 4. And that wasn't even mine; I had to borrow my partner's or my sister's phone every time I wanted to take some photos. I had an old Samsung that could barely take pictures. Now, this wasn't forever ago - it was only 2 years. My photos simply had no chance of competing. Yes, my style was somewhat amiss (and I'm still working on it), but no matter how hard I tried, my photos just lacked the quality that others' had.

Later on that year, I was 'lucky' enough to gain some inheritance, due to the result of a close family member's death. It wasn't a ridiculous sum by any means, but I paid off my student overdraft and bought the single-most expensive item I've ever purchased to this date: my Canon 1200D. It revolutionised my blog and Instagram. The quality of images I was able to take skyrocketed overnight, and  I my follower numbers increased massively with it. It really makes me question whether I would have given up with this blogging malarkey without it. I may have gotten too frustrated with using shoddy equipment, or I simply may have stuck at a tenth of the following I have now. Obviously it's not all about the numbers, etc, etc, but to not progress with my blog would have been demoralising, and without this piece of equipment I wouldn't have been able to be anywhere near as creative as I am now with my posts.

In a world that gets faster and faster all the time, the pressure to create high quality visuals is increasing. Microblogging is set to boost your Instagram by a mile in 2017. So it makes sense that creating good quality images is something we all need to be focusing on. But what if you don't have the means to? What if you're creating stunning flatlays, but only have a five-year old Samsung to take pictures of them on? You're being ignored, unfollowed and left undiscovered because people demand higher quality images nowadays.

Obviously phone cameras are getting better and better with each new release now, which has led many people to suggest that you don't need an SLR for your blog, you just need the newest iPhone. Which is all well and good if you can afford it. But again, it's still a question of money. Every single 'how to improve/increase followers on Instagram/your blog' post I've read recently has mentioned high quality images. It's forced at us from all sides. And now there's the expectation that a good blog will have good pictures. End of. It worries me how much incredible content I'm missing, or how many wonderful writers have given up on their blog because of this.

I know I've only focused on photography equipment and money up until now, but that's just a tiny fragment of it. Can you honestly say that you've never overspent on something 'for the blog'? What about that massive ASOS haul that you did just to get the extra views (and then sent back half of because it nearly bankrupted you)? Or the £40 candle that you won't ever burn because it's too expensive to use as anything other than a cute blog prop? I think we're all guilty of pushing the boat out a little too far to compete.

Before you all go away like 'ugh she's clearly just bitter because she's poor', that's not true. This post isn't an attack or a critique, it's just a look at the way things really are. Yes, it'd be fab if the amount of money you have didn't affect your ability to succeed. But it's just simply not the case. It's the same with almost every other hobby out there, so I don't know why there's such a big taboo over talking about it within the world of blogging. Yes, you could be an amazing, naturally gifted tennis player, but if your only racket is ten years old, you can't afford lessons and you can only buy the cheapest trainers to practise in, then you're going to be at a loss. It's the same for all sports, things like sewing, video gaming, etc. It does come down to money.

So yes, I do think you need money to be a successful blogger, but no, it's not impossible to do on a tiny budget to start with. And there's no shame in it. What if you've worked really fucking hard to get that new Gucci bag, and then you're slammed for being 'unrelatable'? Blogging is seen as something 'anybody can do', and that's true. It's free to write down your thoughts and publish them in a blog, but when you really start getting into it, costs rack up, and the state of your finances does make a massive difference.

What do you think?