10 things I wasn't expecting when I visited Florida 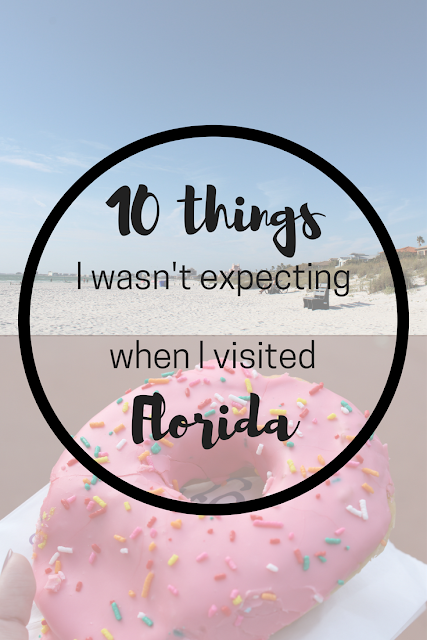 I loved my time in Florida last month, but there were definitely some things that cropped up which I wasn't expecting at all. Obviously this post isn't made with the intent to cause offence; it's just a little list of all the things that shocked me.

1.) Automatic toilets everywhere. It took pretty much the entire two weeks I was there to work out how to not set off the automatic toilet flush every time I went for a wee.

2.) Fries, not chips. Sometimes nothing hits the spot quite like a good chip shop chip, am I right?! I had no idea that chunky chips were just not really a 'thing' in Florida

3.) There are gun ranges everywhere. And people totally go as some kind of family bonding activity?? I've written a whole post on my experiences with this here.

4.) Water is more expensive than coke. Why is this a thing? You honestly have to decide between having a drink that's actually refreshing and saving a little bit of money.

5.) There aren't alligators everywhere. After the tragic incident in which a young boy got attacked by an alligator at Walt Disney World, the media made it seem as though they were running loose everywhere. We didn't see any however, until we actually went looking for them at Boggy Creek's Gatorland.

6.) Finding a recycling bin is practically impossible. I really struggled with not being able to recycle hardly anything whilst I was away. Despite owning his own house in a residential estate, my uncle is barred from getting a recycle bin for himself or renters because he's not a US resident. How strange is that?!

7.) No one uses change. I felt so self-conscious using anything smaller than a dollar to pay for something. People just avoided taking/giving change. I was short-changed by a couple of pennies a few times, and all I could consider was how angry the little old ladies who frequent the restaurant I work in would be if I did the same to them!

8.) Food shopping is so darn expensive. If you head to any supermarket in the UK, there's always more expensive brands and cheaper brands. You can opt between things like Sainsbury's basics, Tesco's finest, or a variety of brands that deal in their own specific foods. Any supermarket we went to in Florida was ridiculously expensive, no matter what the quality of the food was like. I can see why people eat out so often!

9.) No one walks anywhere. Every road has sidewalks, but I saw at most ten people using them over our entire holiday. Everything is so far apart that it's hard for people to walk anywhere, and I just felt as though they were eerily empty.

10.) Everyone was so so friendly. I think nice weather just brings out the best in people (or maybe Floridians are generally friendlier to be around than us Brits??!). Everyone we spoke to was more than willing to help us out with anything we needed, and we never received one cold brush off from someone at work.

Have you been to Florida? Did you find anything that shocked you there?