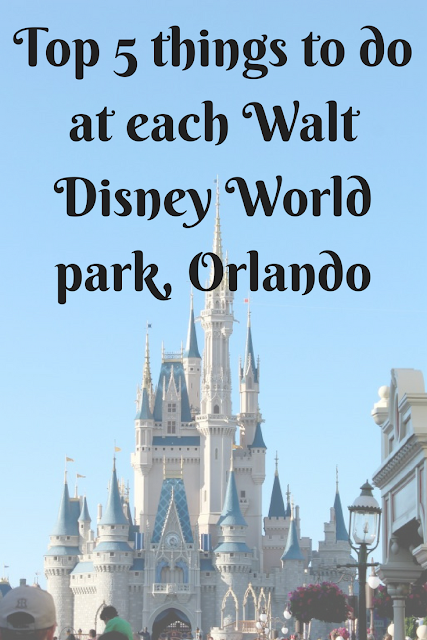 Walt Disney World is a truly magical place, and I feel so lucky to have has the opportunity to visit it last month. Each park (Magic Kingdom, Hollywood Studios, Animal Kingdom and Epcot) has a massive number of attractions, and it's near impossible to get them all crammed into one day. So, here's my little summary of the top five must-see/do attractions at each park. 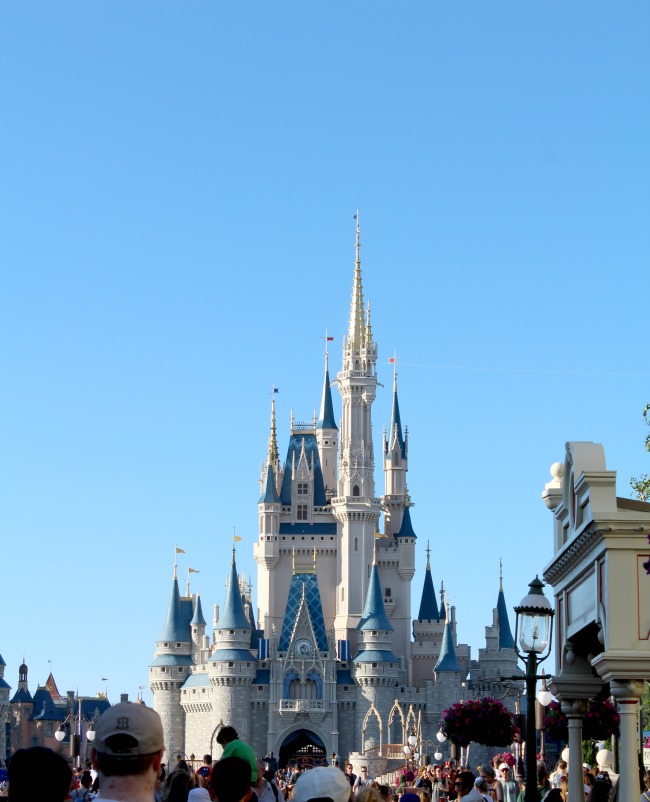 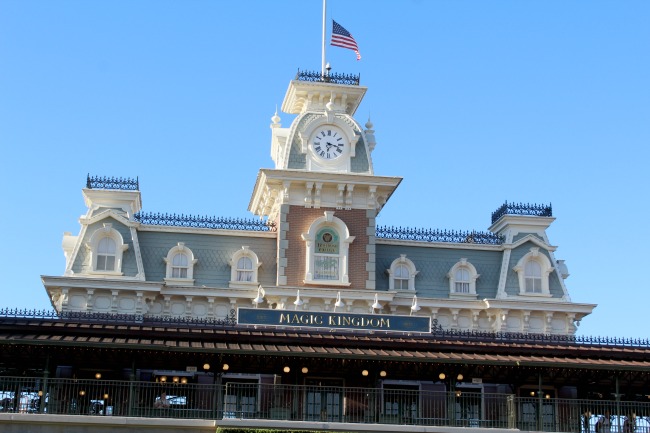 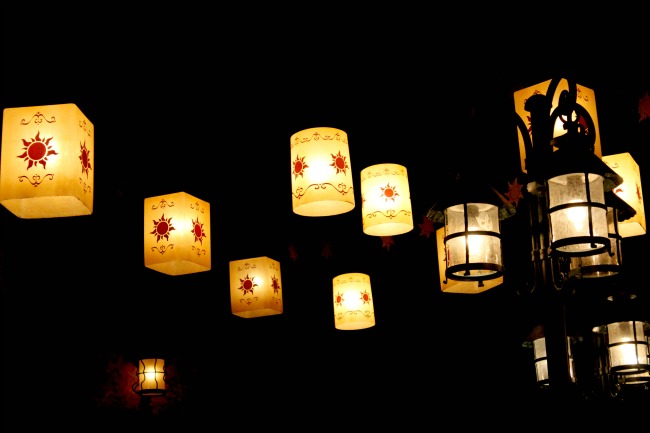 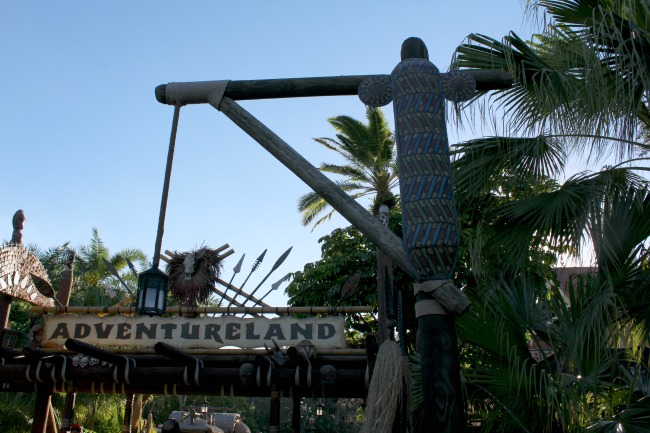 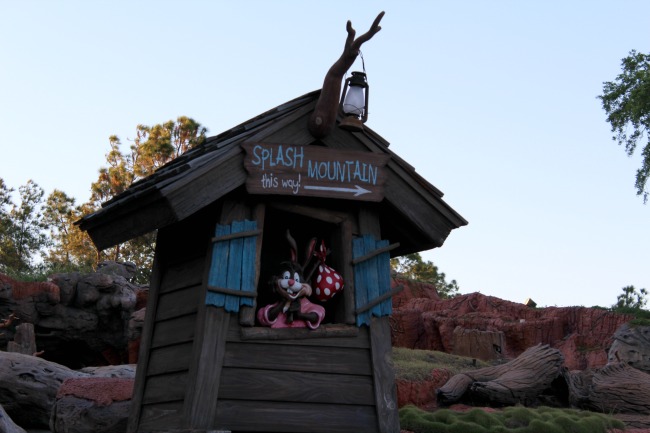 This is the biggest of the parks as well as the most famous. If you've only got the opportunity to head to Disney for a day, then this is the one to go to. In no particular order, here are my favourite attractions of Magic Kingdom:

1.) The Cinderella Castle. You can't miss out on a cliched selfie in front of the Disney castle can you? This is where Magic Kingdom's fireworks go off every single night, as well as a little visit from a certain fairy.
2.) Big Thunder Mountain Railroad. I'm a massive wimp when it comes to big rides, but this sits nicely between being a little scary, but something that I (and kids) can totally handle.
3.) Pirates of the Caribbean. This is another one that's perfect for kids and people who aren't huge fans of scary rides either. Plus Johnny Depp sometimes turns up and acts the part of Jack Sparrow on the ride, so you can't miss out on the potential for seeing that!
4.) Space Mountain. We didn't get a chance to go on this (it had broken down, boo), but you need to go so that you can sing along to 'I've been on Space Mountain 17 times', right??
5.) Haunted Mansion. This one is just a whole load of fun. They've got so much to interact with in the queues, and you're taken through a horror room in the Haunted Mansion before stepping onto the ride. 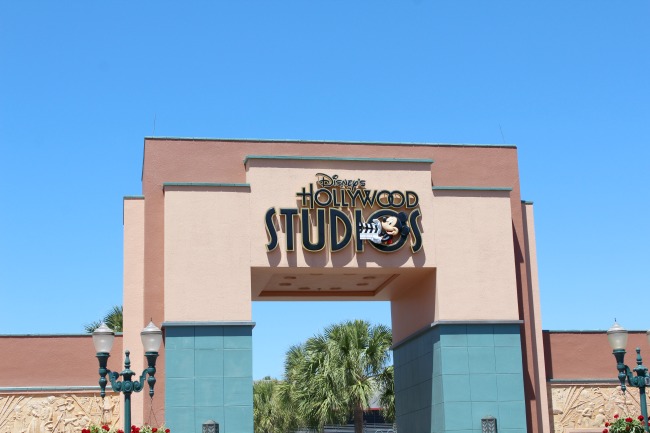 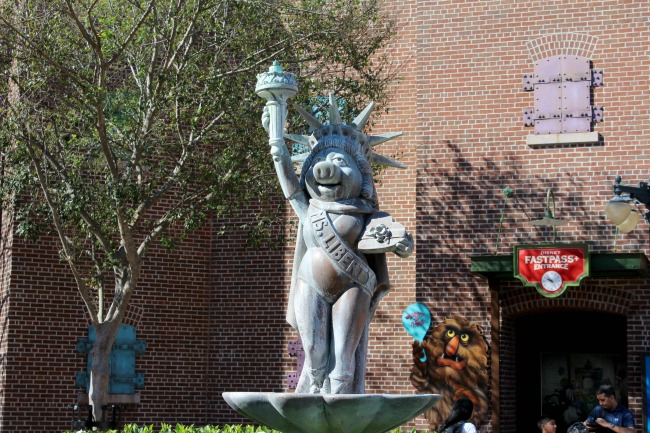 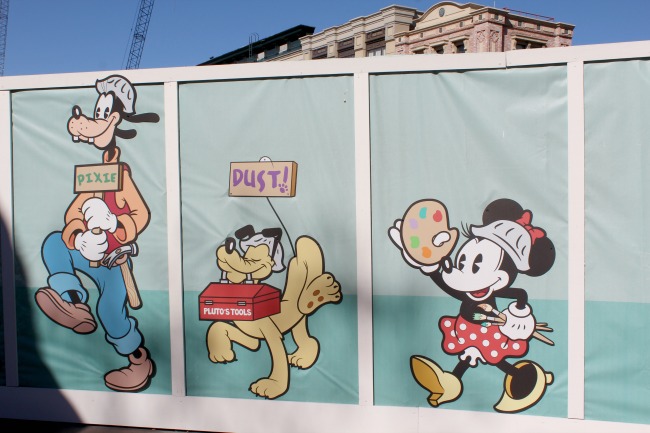 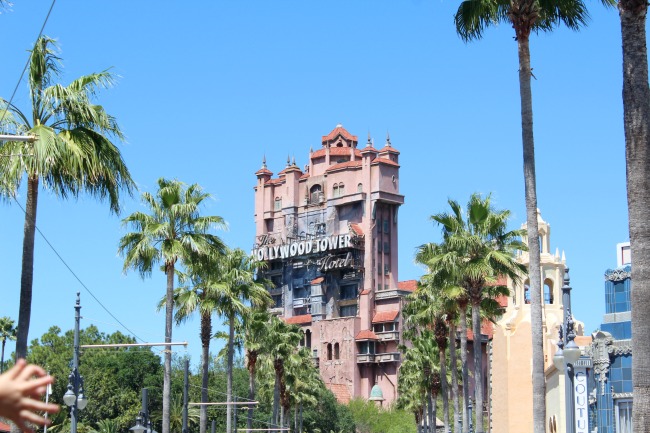 We've moved from the biggest park to the smallest. Hollywood Studios is still jam-packed with goodies though, and in my opinion has most of the scariest rides in it! Here's the five things I think you can't miss out on:

1.) The Tower of Terror. This is one that (ironically) I did miss out on, because I'm utterly petrified of lifts breaking down and I thought this would make it ten times worse. BUT, the rest of my family that went on it said it was pretty darn good.
2.) Indiana Jones stunt show. Stunt shows always have my adrenaline pumping a little, and it was fab to see how big movies create some of their 'special effect' scenes using stunt doubles and a whole lot of trickery. This was probably my favourite attraction of the park.
3.) It's a Wonderful Shop. Hollywood Studios has an entire shop dedicated to Christmas. This is basically my dream, and I picked up a little Christmas bauble to go on our tree this year and remind us of our trip.
4.) Muppet Vision. 3/4D shows are something that we did a whole lot of whilst at Disney and this was one of the best IMO. You got to sit in what felt like a massive theatre and they even had the hecklers in a box in the corner!
5.) Star Wars launch bay. A simulated ride that makes you feel as though you're heading into space, following R2D2 and the gang around. I'm not a huge Star Wars fan, but if you are then it's definitely something you need to experience. 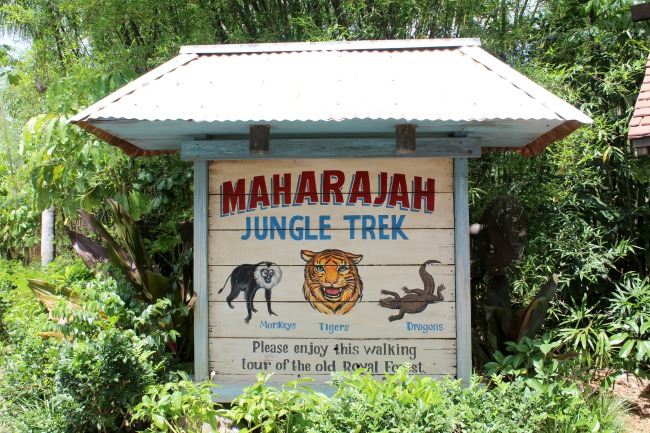 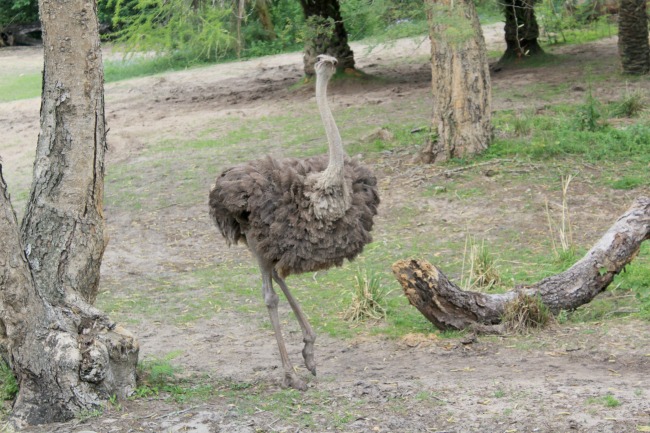 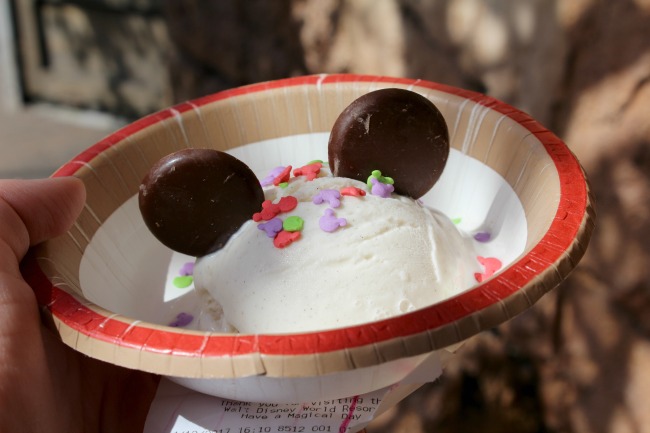 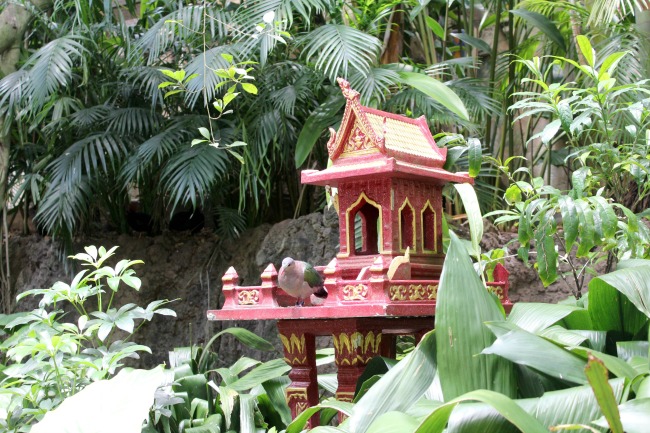 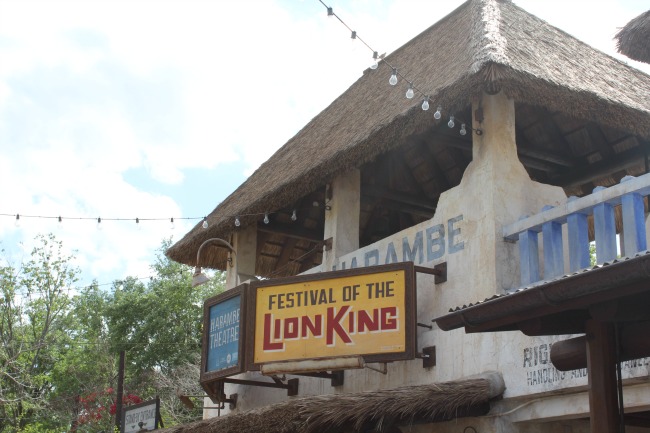 Last month's trip to Disney actually wasn't my first time going; I'd also been as a kid. I had really bad food poisoning when we were meant to go to Animal Kindgom, and the day passed in a blur of nausea and misery, and we had to leave super early. So this was the only park that I didn't really know what to expect with, but I loved it. It was so busy on the day we went, so we skipped over going on most of the rides,but there was so much else to explore that made up for that. Here were my 5 favourite parts:

1.) Gorilla Falls Exploration trail. This was effectively a stroll around a mini zoo. There was a family of gorillas, complete with their little baby as well as a whole host of birds, meerkats and fish.
2.) It's Tough to be a Bug. This is another 3/4D show, and it was so creepy that it had a tonne of little kids screaming. There was spider 'acid' shot at you, a hornet 'sting' in the back and a whole load of learning more about the creatures that live in the dirt.
3.) Kilimanjaro Safaris. This is the No 1 attraction of Animal Kingdom that you have to see. You load up into a little truck, and go trekking around some massive grounds that host a whole variety of animals, including giraffes, lions and hippopotamuses. I had so much fun spying all of the animals and snapping away with my camera here.
4.)  Maharajah jungle trek. This was very similar to the Gorilla falls section, except it was much longer and filled with completely different animals. We spotted a couple of tigers here, as well as a komodo dragon. These 'walking exhibits' are some of my favourites because they allow you to go at your own pace.
5.) The Tree of Life. This is a massive tree sat at the heart of Animal Kindgom and it's breathtaking. When you get up close (we did this whilst queuing for the Bug's Life ride), you can see the array of animals carved into this man-made construction. it's so beautiful and definitely something I wish I took more photos of. 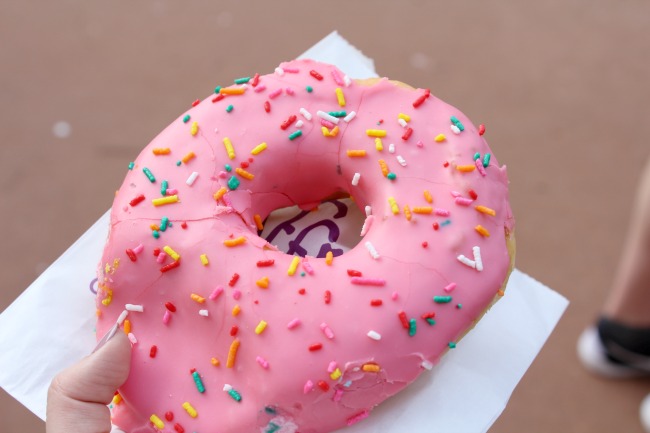 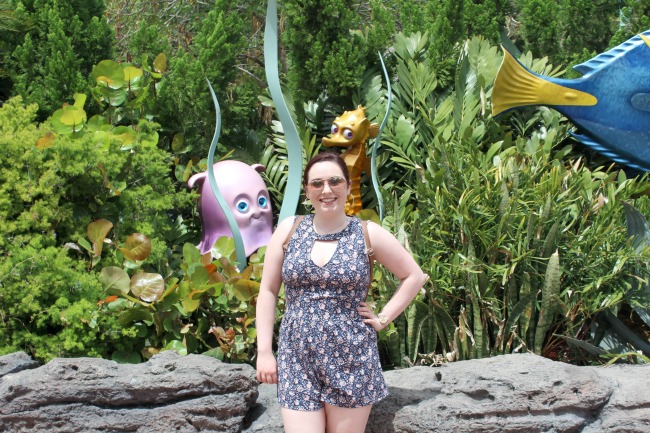 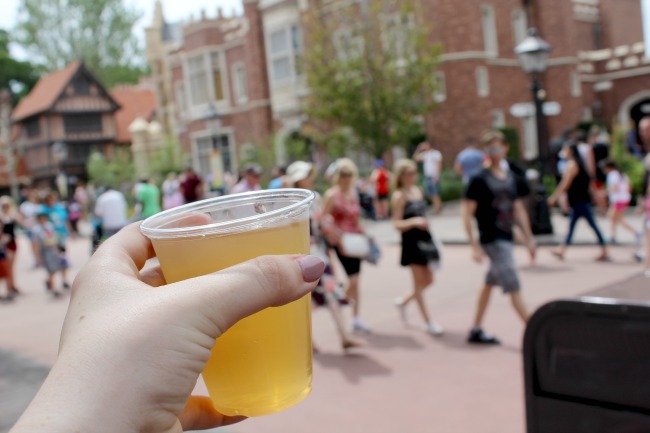 Epcot is a bit of a weird one. It's much less about the rides (honestly there's hardly ANY) and more about experiencing different places. If you didn't know, the majority of Epcot is around a massive circular lake and is split up into various countries from around the world. As you go round, you can try food from different places and buy lots of quirky little gifts. Here are my top 5 attractions:

1.) Try a cup of English cider. I missed cider when I was away (for real, it's just not as big a thing over in Florida), and I had a cup of strawberry cider from 'England' and it was SO tasty.
2.) Nighttime illuminations. The fireworks at Epcot are nothing short of incredible. Out of the ones at all the parks, these were possibly the most spectacular. They're hosted on the lake at the centre of the park, and it's important to get a good spot to see them early because everywhere fills up quickly!
3.) Katsura Grill. Finally I'm getting down to the most important thing: food. I really wanted to eat in 'Japan' as it were (I'd missed green tea and teriyaki sauce too much whilst away). It was a semi-peaceful spot in the chaos of Disney and the food was exactly what I needed.
4.) Mission Space. This was not a ride for the queasy-stomached. In pods of four, you entered a 'rocket ship' and took off into space. To get all the G-Force going the pods were spun around at an incredible speed and it honestly felt like you were travelling upwards at hundreds of miles an hour.
5.) Soarin' (flying, there ain't a star in heaven that we can't reach. I just couldn't resist). This was the weirdest ride I've ever been on. You strapped into a row, and were brought forwards and up so that your legs were dangling way off the ground. We then 'flew' over the world, different places came with different scents which were sprayed around us.